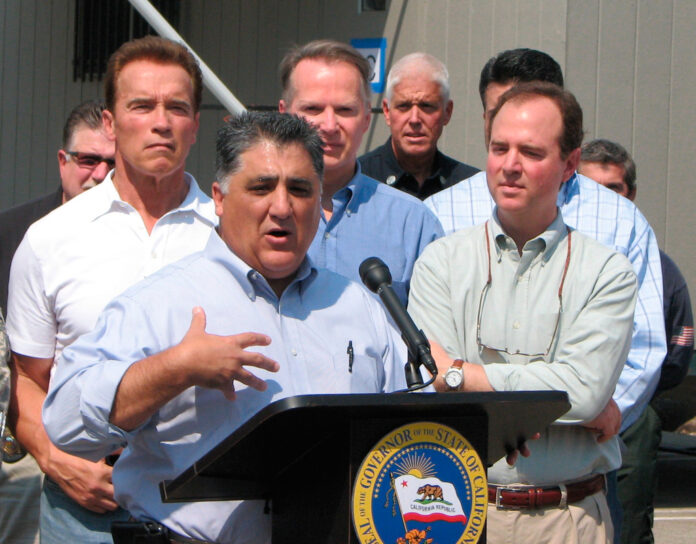 Among the 120 California state legislators, Sen. Anthony Portantino may be the only one who lists his home telephone number on the state contact website.
That’s led to a few odd conversations with his colleagues at the capitol, he mused recently.
“I’ve been asked before, ‘What do you say when someone calls you at home?’” he chuckled. “I tell them, ‘Well, I go, “Hello?” How do you answer the phone at home?’”
Portantino’s been answering those phone calls since he launched his political career in 1999, starting as a city councilman in his hometown of La Cañada Flintridge, where he still resides. From the beginning, he grew accustomed to local residents calling at all hours or even paying him unannounced visits. He still vividly recalls some of those encounters, 20 years on: One elderly woman phoned late at night, upset, and loudly laid out a bitter complaint. After finally taking a breath, she told him, “I know you think I’m yelling at you, but I’m not really yelling at you, it’s just, who else am I gonna call about this at 10:30 at night?”
Now serving his second Senate term in the 25th District after being reelected in the Nov. 3 election, the legislator — who prefers Anthony as his nomenclature — has maintained that open-door policy over the years. In fact, he said some of the signature legislation he has crafted arose from open conversations with residents at the post office, supermarket or the sidelines of his daughters’ AYSO games.

After serving as city councilman from 1999-2006, Portantino represented the 44th Assembly District from 2006-2012 after defeating Republican then-Los Angeles County Supervisor Mike Antonovich. That experience widened his connections to the 25th District, which encompasses three moderately sized cities — Pasadena, Glendale and Burbank — as well as 15 small communities throughout the San Fernando and San Gabriel valleys.
“I try to be very plugged into the community and to be accessible; I talk to a lot of people,” said Portantino, who laughingly attributed his gift of gab to being an “Italian from New Jersey — we like people, we talk to people.
“When you’re open to other people’s ideas you can solve problems, because I certainly don’t have all the answers or the expertise,” he continued. “When you talk and listen to people, you get good ideas. There are a lot of people who want to be the smartest person in the room; well, I just want to sit next to the smartest person in the room. If you recognize what you don’t know, you can do a lot.”
Of those everyday encounters, a few have led to legislation that saves lives, such as AB 137, signed by then-Gov. Jerry Brown in 2012. The measure ensured that more women have insured access to mammogram screenings before age 40, allowing doctors to order diagnostic tests based on other high-risk factors. That bill came about after Portantino struck up a conversation with a constituent at the post office, who recounted the situation of a friend who’d been diagnosed with breast cancer and ordered to have a dual mastectomy after her very first mammogram at 40. The procedure likely could have been avoided with preliminary intervention.
Another bill he authored upon soon arriving to the Senate was Assembly Bill 34, which created a state public cord-blood collection program. That idea sprang from a chat with a local constituent whose son had been cured of leukemia at Johns Hopkins with stem cells derived from umbilical cord blood. After much research, he was shocked to learn there was no state program to collect the blood, which has long been known to contain stem cells that help cure blood-related diseases, including leukemia, sickle-cell anemia and other cancers. He has seen the program through to success by securing follow-up funding and tying it to the national donor registry. As of today, there have been 28 matches nationwide.
“I used to say if the program saved one life, that’s enough for a lifetime, and now there have been 28 matches,” he noted.

During his more than 20 years of public service, Portantino has been absorbed by issues affecting Pasadena and neighboring communities. He joined the 710 Freeway tunnel fight in 1998, and as an LCF councilman formally requested that the city also join the fight. That activism led to the beginning of a decades-long working partnership with folks who’d been fighting the tunnel for six generations, he recalled.
“Those local activists were the real heroes in the death of the 710; it just goes to show what grassroots efforts can do. I learned a lot during those negotiations, and I kept my word along the way. … I feel I was very fortunate to help negotiate the end to the tunnel.”
Portantino personally negotiated the demise of the freeway with the Brown administration the day after being first sworn into the Senate in 2016. The negotiation included Portantino and the secretary of transportation unveiling the final environmental impact report at Arlington Gardens that replaced the 710 tunnel as the preferred alternative for the 710 corridor and paved the way for Portantino’s Senate Bill 7 which formally ended the tunnel threat. Portantino negotiated with the Newsom administration the legislative language that ended the threat of the freeway forever, helped the nonprofits in the corridor purchase their properties and gave Pasadena the ability to develop the leftover freeway stub.
In another recent matter of note in Pasadena, Portantino helped secure funding for Arroyo Seco preservation. After the land was left out of the Upper Los Angeles River and Tributaries Revitalization Plan, the senator authored legislation to correct the oversight and followed that up by securing $3.5 million in 2019 for projects within the arroyo, adding another $800,000 for projects in the upper Los Angeles River in Glendale.

GOING HIS OWN WAY

Portantino has long esteemed mental health, youth, education, gun-sale reform and HIV education as some of his personal pillars of advocacy. In 2019, he was awarded the prestigious Ellis Island Medal of Honor award by the Ellis Island Society, joining 92 others “whose accomplishments in their field and inspired service to our nation are worthy of commendation.”
Yet, more than once, Portantino has used his independent judgment to vote his conscience, breaking with fellow Democrats and at one point even being nicknamed the “maverick” in the press. Those digressions have sometimes come at a high price, he noted, though he still stands by his choices.
“I use the lens of being a father and I look at how things affect families — I try to just be the voice of average people,” he said. “I’ve learned you don’t have to agree with everybody, but what people want to know is that you have principles behind your decisions.”
As chair of the Senate Appropriations Committee, Portantino said he has learned to ask, “What is it we’re trying to do and does this accomplish it?,” adding, “I look at part of my role in that position as trying to be the last stop in thoughtful.”
With regard to issues related to housing: While in the Assembly, he opposed the dissolution of redevelopment agencies in California, a breakup that took away from cities and counties about $12 billion that would have gone toward building affordable housing. His argument at the time was that the state should not end its only economic development program and dedicated funding for affordable housing without first having a replacement (“Here we are 10 years later and still don’t have a replacement,” he added).
“I was severely punished for sticking up for cities and for fighting to keep this dedicated funding source for affordable housing,” he continued, adding that “the irony is my actions on SB 50 two years ago were consistent with my belief that we should be spending our money and resources on affordable housing and not market rate housing.”
That bill was a plan to rezone most of California from single-family homes to four-plexes and other density dwellings so developers could essentially build market-rate housing with little to no local control. Portantino opposed it on the floor of the Senate, where it died because many Democrats in Los Angeles County saw it as a trickle-down approach that did not appropriately guarantee affordable housing, did not respect historic properties, would have devastated poor and working-class neighborhoods and cut regulation.
Along the way, Portantino worked with Pasadena to try to incorporate historic preservation into the housing bill language.
“If we don’t preserve the character of our cities everything will be antiseptic and look the same, so an important nuance was creating stronger definitions for what is historic preservation on some of the housing bills,” he said. “We have unique communities and we should preserve them; it’s always amazed me how many folks are willing to just tear down something, throw our character out of the way. Devastating historical resources is not going to make or break housing policies, but it will negatively impact the community. It doesn’t mean you can’t have density, it just means you have to be more thoughtful about where you place it.”

Going forward, Portantino said he is hyper-focused on recovery from the coronavirus pandemic. That includes making sure schools have the resources to reopen safely, securing personal protective equipment for school sites, and efficiently testing on campuses.
The lawmaker, who also sits on the Banking and Finance Committee, recently held two town halls with 17 chambers of commerce in District 25 and the Governor’s Office of Business Development to promote small business and nonprofit COVID-19 grants.
Getting the economy back on track by securing small business assistance, finding a way in which restaurants can reopen and coming up with a balanced tenant/landlord solution that includes an extension of the eviction moratorium with appropriate economic relief for property owners are topics of utmost importance, Portantino said.
However, first things first, he emphasized: “We have to flatten the curve — 4,000 people died yesterday; that’s twice as many people who died in Pearl Harbor. So, we are going to have two Pearl Harbors every day for the next 10 days. That’s staggering. Our hospitals and front-line health-care workers are doing an amazing job dealing with capacity issues that are historic.
“Yes, vaccines are coming, but please, folks, stay home, wear masks when you go out and be caring and loving good neighbors, ” he said.

Back to School 2022 Digital Edition

Celebration of life for Bob and Bev Frame