Bowman, Davitt to Be Sworn In 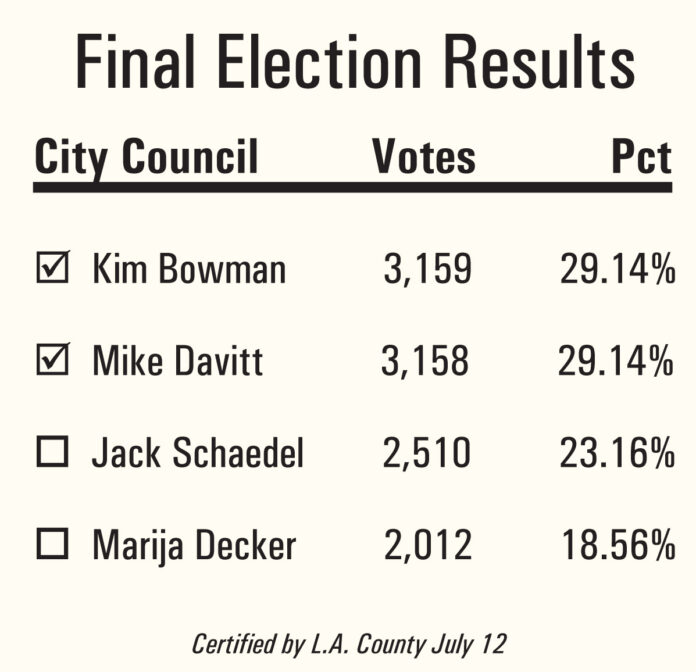 First published in the July 14 print issue of the Outlook Valley Sun.

Los Angeles County recently certified the results from the June 7 election and confirmed that Kim Bowman finished first in the La Cañada Flintridge City Council race by one vote and incumbent Mike Davitt secured another term on the council.
Both candidates will be sworn in by city officials during a July 19 meeting. Bowman — currently serving on the Parks and Recreation Commission — will succeed Councilman Jonathan Curtis, who has served on the City Council since 2013 and did not seek reelection, after securing 3,159 votes.
Davitt, a former LCF mayor who has been on the City Council since 2011, finished with 3,158. Longtime resident Jack Schaedel finished third in the race with 2,510 votes, and Marija Decker, a city Parks and Recreation Commissioner, was fourth with 2,012 votes.
The next City Council meeting will not only introduce its newest council member, but also reshuffle the official titles for each official — an annual tradition for LCF. Terry Walker has served as mayor and Keith Eich as mayor pro tem over the past year, and those positions will be appointed during a meeting scheduled for Tuesday at 6 p.m.
The L.A. County Board of Supervisors approved the results of the election Tuesday. A total of 1,620,593 ballots were processed and counted with 28.48% of eligible voters casting ballots.