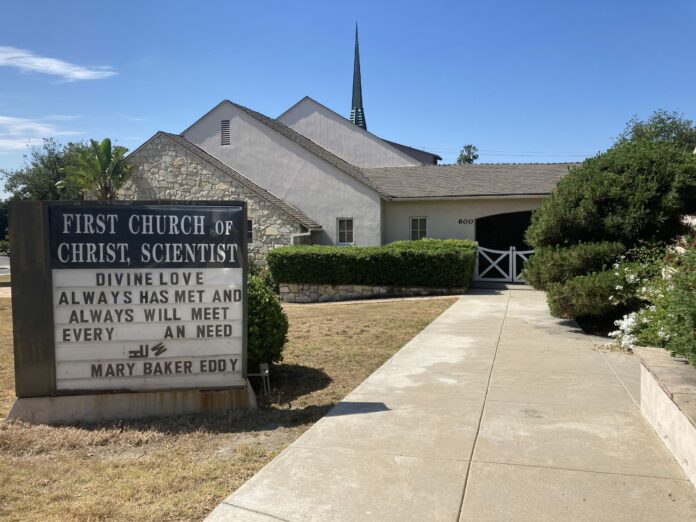 The La Cañada Flintridge Planning Commission will have just two items on the agenda for its virtual meeting scheduled for tonight at 6, and it’s a loaded topic.

The panel will discuss the development proposal regarding 600 Foothill Blvd. that has been contested by many residents as well as commissioners, who balked at backing an earlier plan, the proposed 72-bed Oakmont Senior Living facility, in January 2018.

In order for such a development to go through, the commission would have to adopt a resolution to recommend an amendment to the city’s land use and housing elements that would permit noncommercial development on Foothill. The Downtown Village Specific Plan contains restrictions regarding housing developments on the city’s main street.

The plan to develop the parcel — formerly the site of the First Church of Christ, Scientist, which relocated — was mentioned by city staff members during a recent workshop that presented strategies to accommodate the Regional Housing Needs Assessment, a process involving the California Department of Housing and Community Development that projects how many dwellings are needed in the state. La Cañada Flintridge is expected to show that it can provide 612 units, and the proposed development on Foothill is one of several “pipeline projects” that can help provide a combined total of 82 units.

However, residents have raised various concerns about the development. Prior to the commission’s meeting, Andy Artz submitted a comment saying he supports responsible development that adheres to the city code and philosophy but worries that the proposed development at 600 Foothill would bring more traffic, making it unsafe for pedestrians and drivers.

“Safety is my foremost concern with this development,” Artz wrote. “La Cañada Flintridge and this neighborhood attract families, many of whom have young children. Traffic related to this development has serious potential to endanger the safety of the residents. The traffic on Woodleigh [Lane] moves fast already and traffic turning from Foothill to Woodleigh poses a particular danger for pedestrians crossing that intersection. This large development plans to have traffic enter on Woodleigh, across from a busy [gas] station on a local street. This is simply unsafe.”

Shana Landau also wrote in opposition to the project, saying it could lead to an overflow of parking on residential streets.

According to the municipal staff, the city commissioned an environmental initial study under California Environmental Quality Act (CEQA) guidelines that determined the project wouldn’t present any significant or potentially significant impacts that couldn’t be mitigated to a level of insignificance.

Other residents object to the proposed structure’s height, but the city stated that it is consistent with surrounding low- to mid-rise developments and would be compatible with the overall visual character of surrounding uses along the street.

Another point of contention is the involvement of a city official in the proposed project. Numerous community members believe Curtis has a conflict of interest by being part of the group that is looking to develop the parcel, with a few asking for his resignation from the City Council.

In its response to concerns about a possible conflict of interest, the city staff did not address Curtis’ involvement in the project but did say that the mayor pro-tem does not have a relationship with ESA, the consulting firm engaged by the city to prepare the CEQA document. Curtis served on the LCF Planning Commission for five years prior to being elected to the City Council in 2013.

“ESA was selected through a competitive [request for proposal] process and their work is managed and reviewed by Community Development Department staff,” the LCF staff wrote on the agenda for the Planning Commission meeting.

City Manager Mark Alexander added that the proposal is going through the appropriate legal procedure and that Curtis has followed the Fair Political Practices Commission’s Political Reform Act by recusing himself from discussing or making decisions on any matters pertaining to the parcel. The act states that an official who has a financial interest in a decision that could be a potential conflict of interest must leave the room until the discussion, vote and any other disposition of the matter are concluded.

“A property owner, whomever they may be, including the owner of a property who happens to be a member of the City Council, has a right to submit an application for development of their property,” said Alexander, who added that the staff has been monitoring the situation to make sure it is done in accordance with state law. “Anything pertaining to [the development of 600 Foothill Blvd.], he is in fact recusing himself and not participating in the decision process.”

One group of residents that has closely monitored the situation is the nonprofit group Together La Cañada, whose members have supported senior housing but feel it should be provided in accordance with existing ordinances and zoning codes.

“We want appropriately-sized townhomes envisioned in the City’s Downtown Village Specific Plan but are presented with oversized, profit-driven, all-or-nothing developments,” the group posted on its Facebook page on Wednesday.

TLC is asking that the development be two stories rather than three and be a living, noncommercial space that includes two- and three-bedroom units, not studios and one-bedrooms. It also asks that there be two pickleball courts, vehicle access from Foothill Boulevard for passenger loading, and two parking spots for each resident.