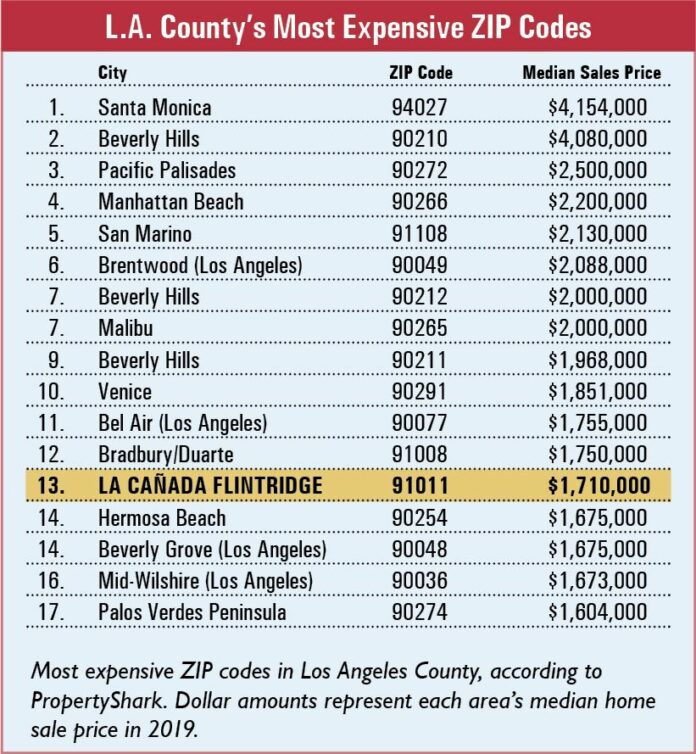 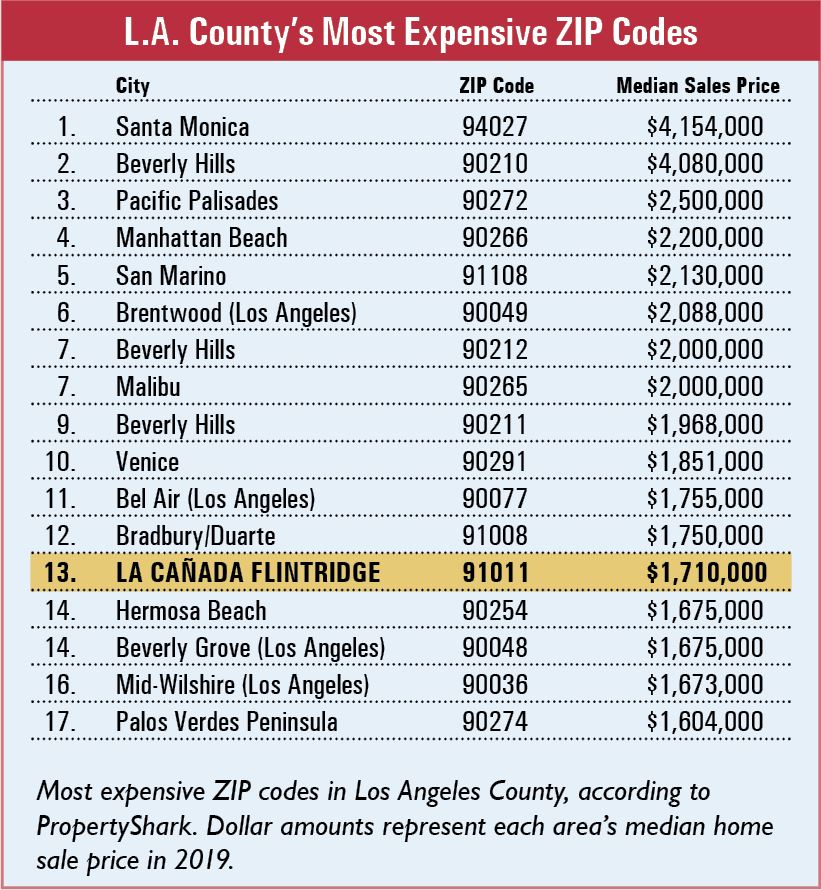 In what is becoming a yearly tradition, La Cañada Flintridge has again landed on the list of the priciest ZIP codes in Los Angeles County, the state and nation as measured by home sales, according to real estate database PropertyShark.
The recently released “Top Most Expensive U.S. ZIP Codes in 2019” list reflects an analysis of year-to-date residential sales to determine the median home sale price in each ZIP code, PropertyShark’s website said.
Though lofty, the median price this year in LCF’s 91011 ZIP code — $1,710,000 — was slightly lower than last year’s number, $1,770,000. The postal zone ranked No. 13 in Los Angeles County, No. 54 in the state and No. 62 nationwide. In 2018, it ranked 11th in the county, 46th in California and 57th in the U.S.
“The change in rank came as the result of two trends,” PropertyShark spokeswoman Eliza Theiss told The Outlook by email. “One was a slight contraction of LCF’s median, the other was the faster pace of price growth registered in other California communities.”
She said the contraction of LCF’s median was a minus 3% year-over-year, which translated to the $60,000 cut.
The LCF ZIP code was one of 43 in California — among the state’s 91 most expensive — where the median was down compared to last year’s figures, said Theiss, whose company’s data often is cited by real estate agents.
The most expensive ZIP code in the nation, for the third year in a row, is in San Mateo County’s Atherton, which had a median home sale of price of $7,050,000. Last year, it was $6,700,000.
Pat Anderson, president and CEO of the La Cañada Flintridge Chamber of Commerce, said in a statement she was pleased to hear about the ranking.
“We work hard to achieve such recognition in the areas of education, public safety, business advocacy through oversight and sensitive involvement from the leadership of our amazing school district, our local elected City Council members, Capt. Deeds and Chief Mackey and the impressive resources of the [county] sheriff and fire departments,” Anderson said. Todd Deeds leads the Crescenta Valley Sheriff’s Station, and Anderson Mackey is a county Fire Department assistant chief in the area including LCF.
The chamber and the other organizations have helped in the effort to create a community that is “extremely desirable” to live, work and raise a family in, Anderson said.
“Every city has challenges or crisis events that challenge our thinking, but the working relationships of all parties come together to solve problems,” she added. “This blueprint for success is the credibility and justification for our confident and progressive ranking.”
To come up with the list, PropertyShark compiled all residential transactions that closed between Jan. 1 and Nov. 5 this year, taking into account condominiums, co-ops and single- and two-family homes, the website said. Sales or purchases of several properties, such as portfolio purchases, are excluded from the calculation, Theiss said.
For an accurate representation, only ZIP codes that registered a minimum of three residential transactions were considered, according to the site. Due to a number of ties, 125 ZIP codes made it into PropertyShark’s ranking this year. Median sale prices were rounded to the closest $1,000.
PropertyShark called L.A. County the most expensive in the U.S. as it contributed 21 ZIP codes to the list of the nation’s 100 priciest zones, according to PropertyShark.
Those ZIP codes include parts of Santa Monica, which has zones that placed third and 77th, and Beverly Hills, which had areas ranking fourth, 39th and 42nd. Other L.A. County areas that ranked high on the list were Pacific Palisades (27th), Manhattan Beach (32nd), San Marino (34th), Brentwood (37th), Malibu (39th), Venice (48th), Bel Air (56th), Bradbury/Duarte (in a tie for 58th), Hermosa Beach and Beverly Grove (in a tie for 66th), Mid-Wilshire (67th) and Palos Verdes Peninsula (in a tie for 73rd).