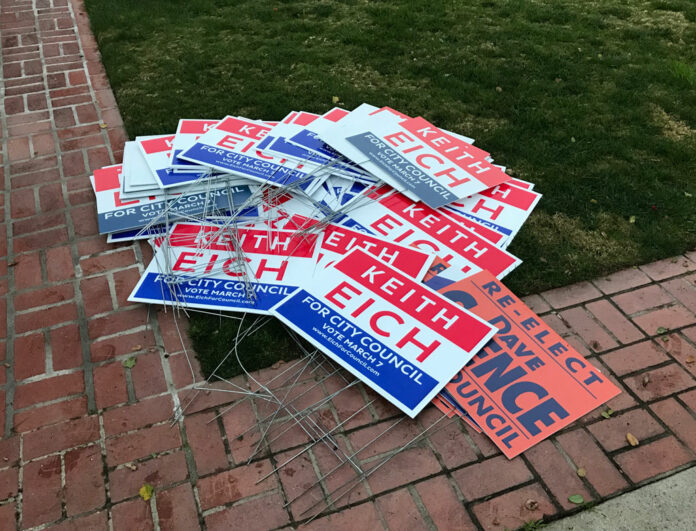 The race involving four candidates for two seats on the La Cañada Flintridge Unified School District Governing Board has been marred by the theft of political signs from residential yards, a trend mirrored — and widely discussed on social media — across nearby municipalities ahead of the national, state and local elections on Nov. 3.
All of the LCUSD board candidates have reportedly had signs stolen or defaced since campaigning began, and though Sgt. Ed Retamoza of the Crescenta Valley Sheriff’s Station confirmed authorities have received multiple reports, he could not confirm a total. The crime is considered petty theft, he added.

According to Suzanne Jensen, campaign manager for Jeremiah Arnold, more than 200 yard signs touting the candidate have been stolen or vandalized. In one 48-hour period, she added, more than 125 signs were stolen. Other signs were taken from their original locations and placed within the public right of way, prompting workers for the city to collect them.
Arnold supporters “have discovered yard signs in their trash bins, sometimes ripped up and destroyed,” while other signs “have been found defaced with hate speech, threats and social justice slogans,” Jensen said.
Meanwhile, Arnold said he’s trying to focus on staying positive: “Running for a local office is all about giving back to our community and guiding it to a successful future. … After all, in less than a week when this election is a thing of the past, we will all be members of the same community built around a shared legacy of educational excellence.”
Candidate Belinda Randolph, meanwhile, has kept a record of where and how many signs she has placed, in part because she heard of the alleged theft going around. She has documented the removal of several signs, with one ending up on a freeway entrance; Randolph said she retrieved it herself.
On a more personal note, she added, her son was verbally harassed by a neighbor as he was trying to place a sign on the property of a supporter who had reported two previous signs missing. He found both of the missing signs in the bushes, Randolph added. The verbal exchange with that person was so unsettling, she added, that she accompanied her son on the remainder of the sign installations.
Since then, after hearing what other candidates were also going through, Randolph has posted on social media a request that residents stop the sign theft and contentious behavior.
“Let’s stop this craziness,” she said. “Let’s return to civil discourse and let’s stop with the illegal acts. And let’s stop with the name-calling. This is absolutely not right. If you do not like a candidate, go vote for someone else. Vote, vote, vote. And let’s be nice to all of our neighbors — please.”
Candidate Caroline Anderson and her campaign manager, Matt Weber, have also recognized that multiple signs have been taken, moved, knocked over or vandalized. Although the group hasn’t kept count, “the more I drive around, the more of my signs are missing from homes that I know had them,” Anderson said, with Weber adding: “This was a very sad and unfortunate aspect of the campaign that none of us expected.”
Candidate Josh Epstein has thus far counted about 20 signs that were stolen, moved or defaced, he said, adding that his own yard sign in LCF was covered in stickers boosting a different political candidate.
Although he expected some sign theft from previous campaign efforts on behalf of other candidates, Epstein said, “This local election has truly been different from any I have ever seen during my time in La Cañada. I hope when it is all over we can put the political squabbles and partisan differences aside and work together to focus on providing the best education possible for every child in our community.”