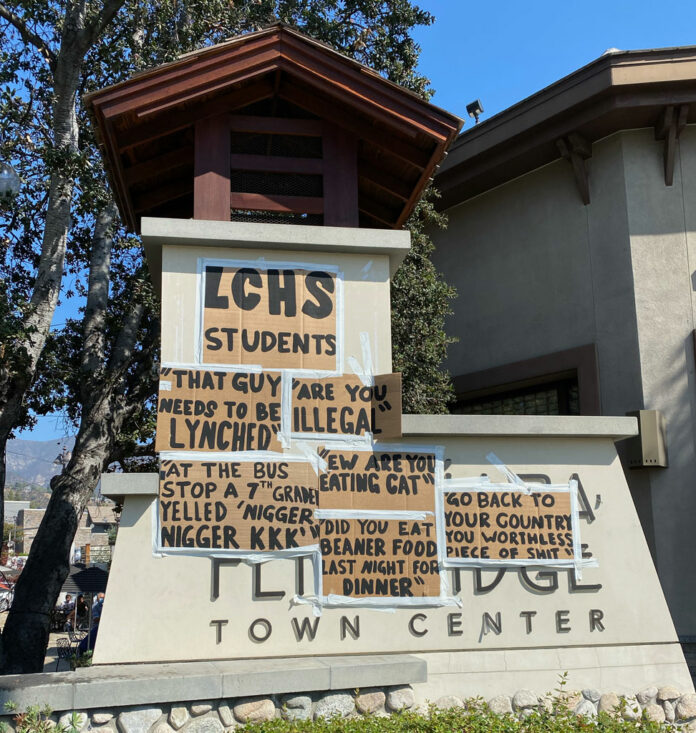 A group of signs that recently were displayed at La Cañada Flintridge Town Center depict racist and hurtful slurs that La Cañada High School students say they have heard and that students have also anonymously posted to the Instagram page at racism_at_lchs, a local activist group said.
The signs were left near the corner of Foothill Boulevard and Angeles Crest Highway after a La Cañada BLM demonstration and were taken down the next morning by Town Center staff.
According to a statement by La Cañada BLM, which was formed as part of a local outcry after George Floyd died while in police custody in Minneapolis in May, the messages on cardboard were left by current or former LCUSD students.

Community reaction to the signs, as expressed on various social media accounts, has included support, objections and confusion, with some people not understanding whether the messages were actually propagating the hate speech.
“The discomfort our community has expressed after viewing the display highlights how deeply damaging these remarks are, especially to the children receiving them,” the statement read. “We are so proud of these students, who are predominantly students of color, for being brave enough to share their stories of abuse.”
The public display also prompted outreach from LCHS Principal Jim Cartnal, who sent out a community-wide email regarding the messages and clarifying what they are referencing. He emphasized that the hate speech does not represent the feelings of the greater student body.
“While too little information is available about who posted the signs and whether they are or were members of our school community, the words are hurtful and do not embody the aspirations or voices of the LCHS student body as a whole,” Cartnal wrote. “Seeing signs with messages of hurt can weaken the bonds of community and campus spirit which we all are working hard to keep alive, even while our community is at distance with one another. Please do all you can to talk with one another and remain close to those whom you care for and love, joining efforts by LCHS students, staff, and LC community members who continue to promote the core values of a caring school and nurturing community.”
La Cañada BLM, meanwhile, stated that the reason students are publicly calling for attention is that “these students have yet to receive the comprehensive support that they need and deserve,” and it encourages “this community to reckon with the racial discrimination that students have been left to confront on their own.”
The group, which does not cite members by name out of what it has said is fear of retribution, continued: “Despite the disappointing initial response by the school administration, we are confident and hopeful that they will use this opportunity to start doing the difficult work of making LCHS and the district as a whole truly anti-racist.”
La Cañada Unified School District Superintendent Wendy Sinnette, who this week listed goals that include an expansion of a student wellness initiative with a focus on diversity, equity and inclusion, denounced the hate speech contained in the quotes that were publicly posted.
She recognized that the “signage emphasizes the importance of our work to bring students a culturally relevant and responsive education so that they grow in the active recognition of and appreciation for the diverse nature of the world in which we live. It is my fervent hope that as a community we join together and look for unifying and substantive ways to advocate and demonstrate for continuing to grow an inclusive climate of care in the culture of our LCUSD schools.”

Kobeissi Ordered to Pay $24M in Abuse Case; He Vows to Appeal

Kobeissi Ordered to Pay $24M in Abuse Case; He Vows to Appeal